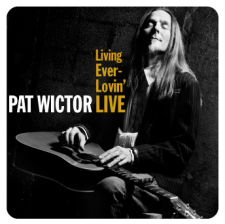 The official release is January 2010, but all who purchase it now will receive it within a week.

All but two of the songs on the CD are previously unreleased--a great collection of new material, including several new originals.

The CD captures all the elements of a Pat Wictor show--humor and warmth, beautiful ballads, foot-stomping blues, stories, fine guitar playing, and collaborations with outstanding musicians.  The shows were recorded live at various venues around the Northeast, between May and September 2009.